The Flatwater Film Festival is an annual event committed to bringing together established and first-time filmmakers from across the state of Nebraska to celebrate their art.

The Flatwater Film Festival was created for the sole purpose of:

To celebrate Nebraska filmmakers by providing a non-competitive platform that showcases their work, to develop a strong community that promotes inspiration and support, and ultimately to foster the next generation of Nebraska filmmakers.

The 2023 festival will be held October 6-8 at the historic Rivoli Theatre in downtown Seward, NE. 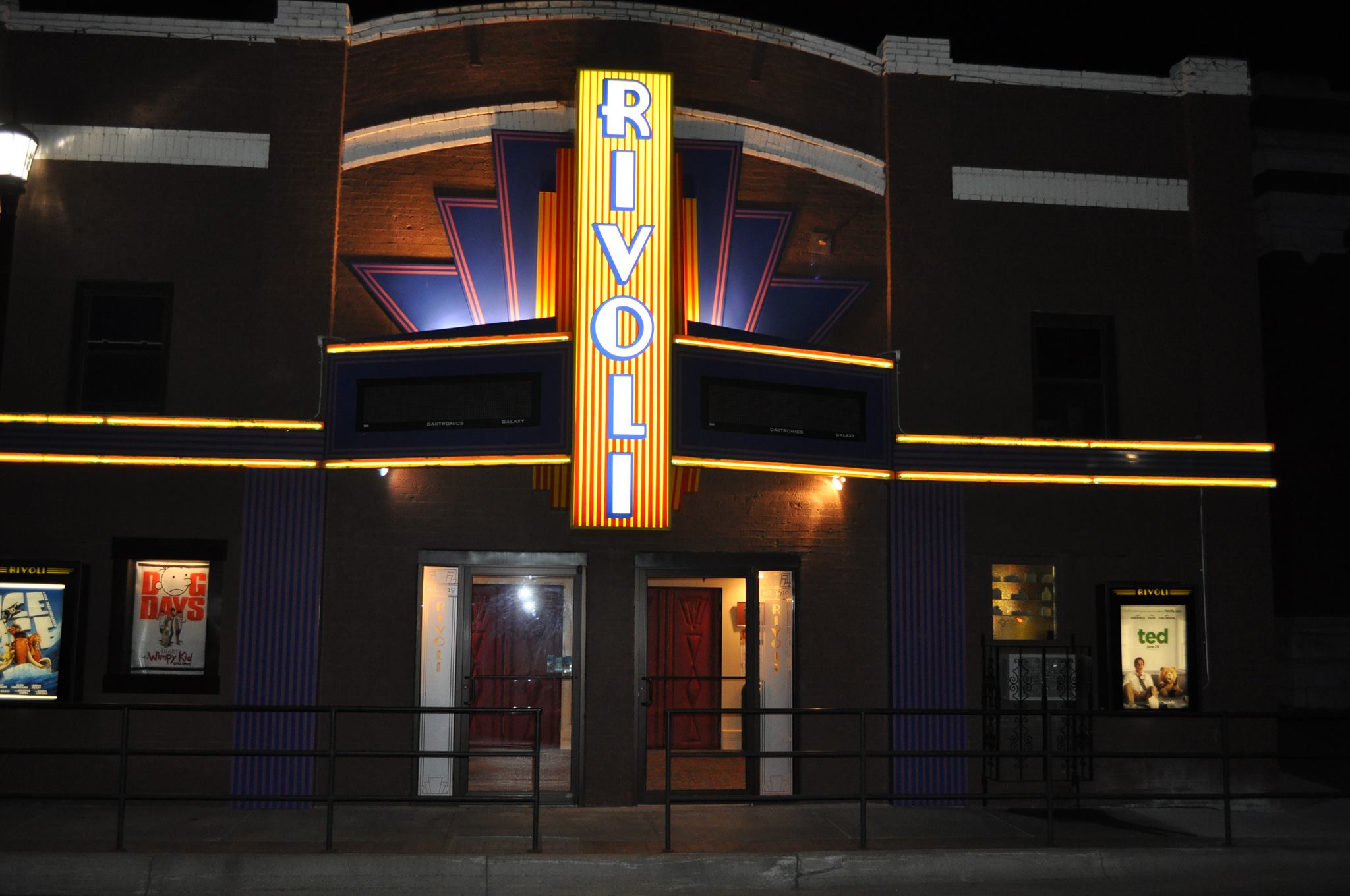 Built in 1919, the theater opened in 1920 and has never closed its doors. The theater has the look of the period, and a rich history both inside and out. Full-size murals adorn the walls on either side of the auditorium, painted as a Works Progress Administration project in the 1930s. It has been family owned and operated by the Wiseharts since 1979 and despite its old-fashioned charms, the Rivoli has a digital projector, high quality sound system, and very comfortable seating. In 2013 a second screen was added which makes it possible to offer the community twice the selection but at the same small town prices.

This short film sends a powerful message of disability awareness. At the same time, it raises the voice against gun violence.

The story follows Jonathon as he embarks on a journey of self discovery after the loss of his best friend Samantha after a college party.

While seeking refuge from the law, a band of thieves shelter inside an abandoned house. What they find inside is more than they counted on.

Two outspoken teens must navigate the upcoming holiday as their worlds simultaneously unravel.

Bombus occidentalis, the Western Bumblebee, was one of the most common species found in the western US. Since the late 90’s, this species has experienced steep decline. Kellie Hayden volunteers her time to to help track and conserve native bumblebee species.

A mini-doc about a crèche in Paparoa, New Zealand, focused on saving an iconic species of kiwi, and how that relates to protecting the entire ecosystem.

Space traveler Will and his cat Penny are summoned to a planet to help a scientist, Wolfgang Spiegel, open a portal into a parallel universe. Lydia, the scientist’s daughter, warns Will about the dangers involved with her father’s experiment and Will faces more than he expects when the portal is opened.

Following the death of their grandparents, three cousins reunite for one last night at the house, only for drama to ensue.

Justine, Cecelia and Rachel all grew up in the foster care system and were abused by the same foster father. They went on to date abusers in their adult lives as well. After Rachel’s recent abuser pushed her to suicide, Justine becomes obsessed with taking justice into her own hands to seek revenge on the man responsible.

A down-and-out Father searches for his missing daughter in the mysterious Nebraska panhandle….and may just find himself.

While waiting for the rest of her paranormal investigative team to arrive, Jayda decides to start exploring an abandoned building on her own. What she ends up capturing is more than what she expects.

Two career criminals are hired for a grotesque job, when curiosity gets the better of them and they invade the privacy of their “boss”.

Josh Brockington was a Ralston High School student involved in theater, choir and filmmaking. His life was tragically ended on March 1, 2000 due to a drunk driver striking his car in Papillion, NE.

McKenzie, an aspiring writer, decides to start up a tabletop game for the first time. As the players embark on an adventure together, they discover more about themselves and the challenges that face them in their own lives.

…The title pretty much tells it all.

Two elderly couples get stuck in an elevator on the way to their class reunion.

A weekly episode of ’60s suspenseful TV series, Jesse is to divide his father’s estate with his siblings but is met with an untimely death.

A husband with a brain disorder that affects his long and short-term memories recounts his marriage and discovers why it’s ending. (Shot in west Texas)

Eager to prove himself after a failed pet-sitting incident, dimwitted Kenny Ray Bleeker steps up to the plate as a last minute babysitting replacement. Kid Nap is a comedic look at a predisposed collision course between responsibility and moronic tendencies.

An otherwise perfect and beautiful couple must learn and deal with a turning of events.

A former child actor returns to his hometown to accept an award and revitalize his image as a beloved son of the Heartland.

Employees of a dying record company struggle with the weight or their futures and find love in the chaos.

Hails and Daniel take care of their child, Kyle, who has been infected with a virus. They keep Kyle locked away in their basement as he begins to age rapidly. Over time, Kyle starts to evolve into something not human, having an Owl-like resemblance, and breaks free.

Caroline searches for her sister, Julie, who has been searching through missing person cases. She gets help from an organization Julie worked for called “Nightfall”. They try to help Caroline but find that something far more sinister is behind the disappearances.

Designed to give survivors of child molestation and sexual abuse an opportunity to have their voices heard and to have public policymakers and potential allies gain a greater awareness of the devastating effects of such negative social interaction on the lives of individuals and the community and social fabric as a whole.

A young girl tries to illegally purchase alcohol under the guise of her Dungeons&Dragons roleplay costume.

A self-destructive ex-Mormon finds out her abusive father is on his deathbed and road trips to Utah to reckon with her past.

A group of sinful bank robbers deal with the repercussions of a mission gone wrong.

An artistic visualization of a heartbreak and following heartache.

Is goodbye truly forever? For this couple goodbye could just be the beginning.

Through the voices of ecologists, ranchers and native people, this documentary profiles one of the last remaining intact prairies in North America.

When the crops are high, a mysterious and deadly being stalks Nebraska fields in search of life force. This is the Legend of Milo Man. One by one, three friends on a camping trip are hunted through the woods and fields of Walton, Nebraska. To what lengths will they, and the locals, go to survive the night?

Letters from the past aid in the grieving process of a young woman.

When a young drag queen confronts her drag mother a dark secret is revealed about their troupe.

A young woman and her adopted son are on the run from her abusive ex-girlfriend, and find themselves haunted by a supernatural force from the past.

A young couple takes a hike in the woods where things may not be what they seem.

A story about a triplet of sisters growing up in Nebraska in 1942.

Landon must find a a way to fix his trouble before mom comes home.

The struggle of unresolved trauma and abuse.

This documentary film follows 8 students as they work toward perfecting a message for the Reverend Doctor Martin Luther King Youth Rally and March. Fifth grade students and their families confront the racist history of the United States and find their voices to share with the world.

Two strangers are brought together by a video dating service.

Alone on an alien planet, space traveler Will finds a lost cat of mysterious origins. The bond they develop is strained when Will can’t let go of his past.

In this session we will cover one of the most important steps in making a film, distribution. We will discuss finding the right distributor, properly delivering a film and promoting your film once it hits streaming services.

Nebraska Independent Film Projects’s treasurer, Chad Haufschild, walks you through how the fiscal sponsorship works, from the application process all the way to receiving disbursement checks. Learn what you need to apply, how and when to use it in your fundraising campaign, how to acknowledge your donors and what it all means to you at the end of your project. He’ll even have PowerPoint slides!

Perseverance in a State without a State film incentive program has been successful. To build this industry to the level we all want, we must become a unified team. Continuing to build our database is critical. Just as critical as building rural film incentives in every community that has LB840.

SESSION — Lighting on a Budget

In this session you will explore how to use inexpensive lights to make your films look more like your mind’s vision. The three-point lighting technique, using practical lights or low-cost units, will be our focus. Also covered will be a few budget ways to make light modifiers to control the lights you use.

Learn how to communicate with your composer so they can bring their best.

Be sure to attend the Directors Roundtable for a discussion with Nebraska independent filmmakers Tom Knoblauch, Maverick Knox, Jeremy Lubash, Kate Robertson Pryor, and Patrick Rea.